The Dharma Center of Oklahoma

Rissho Kosei-Kai Buddhism is Ekayana Buddhism – an outgrowth of the Mahayana tradition.
Ekayana (One-Vehicle Buddhism is an inclusive approach that also acknowledges other spiritual traditions as paths to enlightenment).

Whether you perceive Buddhism to be a spiritual path, a philosophy, or a way of life;
you will find the opportunity to study and practice problem solving tools beneficial for
everyday living experiences, develop mental maturity to maintain balance in this ever-changing world, and grow into healthy personal autonomy using the final guidance of the Buddha to his followers: “Be a light unto yourself and let the Dharma (teachings) be your light.”

By experimenting with these guidelines for good living, we prove to ourselves the value of the teachings in our modern world. As your leave our Dharma Center, you will see a sign that says, “Take your practice with you when you leave.” 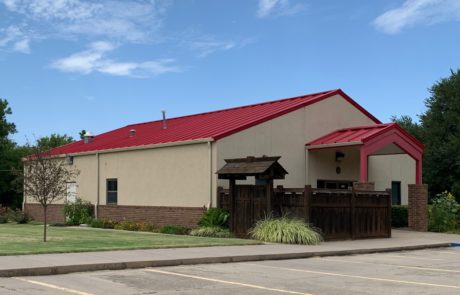 Rev. Kris Ladusau is the spiritual head of the Rissho Kosei-kai Dharma Center of Oklahoma. Raised Methodist in Enid, Oklahoma; her first exposure to Buddhism was in 1972. Her affiliation with Rissho Kosei-kai was established in 1984. Rev. Ladusau received Gohonzon in 1995, Dharma Teacher certification in 2000, Goshugoshonjiin in 2004, and was ordained as a Reverend in 2009. She is the first non-Asian Reverend for Rissho Kosei-kai.

In addition to her responsibilities with the Oklahoma Center, she is also on staff with Rissho Kosei-kai of North America in California, where she helps develop Buddhist curriculum in English and teaches national seminars for continuing education of Rissho Kosei-kai leaders. She also works closely on projects with the Rissho-Kosei-kai International office in Tokyo, Japan.

In addition to being a guest speaker for Buddhism classes at local Universities and High Schools, Rev. Ladusau serves on the boards of the Interfaith Alliance of Oklahoma, Religions United (Oklahoma Conference of Churches), and is a Spiritual First Responder for Natural Disasters in Oklahoma.

In 2015, she was asked to represent the organization at an Interfaith European Peace Symposium in Albania. Connecting with others and respecting all Paths is very important to her and to Rissho Kosei-kai.

The Oklahoma Dharma Center sangha also has several skilled Dharma Teachers who support the Reverend and assist the sangha and visitors.